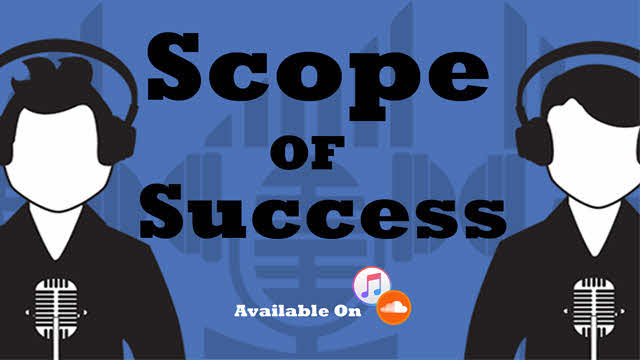 Welcome to another "special" episode from The PM Podcast, in which we introduce you to new podcasts that are created and produced for/by project managers. Today we feature 'Scope of Success'.

So please enjoy Ep1- Mastering the Job Interview - Guest/Steve Potter. Here is what Brian and James write about it in their show notes:

In this episode we speak with one of PMI® Long Island chapter's founders and current member of the board of directors. Steve Potter talks to us about interviewing questions and styles that lead to success.

Brian:   Welcome to the Special Edition of the Project Management Podcast. I’m Brian.

Brian:   We’re the hosts of Scope of Success, the podcast where we bring you business life lessons, one interview at a time. In this episode, we speak to the founder of PMI Long Island, it’s an amazing episode…

Brian:   We learned a lot from it. Thank you Cornelius for this tremendous opportunity. We hope you enjoy the episode and remember to follow us on Twitter and Facebook and subscribe to us on Apple Podcasts.

Male Voice: This is Scope of Success, where we bring you business life lessons and throw a lifeline to your career. And now, Brian and James.

Brian:  Yeah, Welcome to Scope of Success where we’re helping you advance your career one interview at a time but of course we need you to help us so please email us with your show ideas, questions, comments, feedback. You can email us at This email address is being protected from spambots. You need JavaScript enabled to view it. and follow us on Twitter @scopeofsuccess, we’ll try to read as many responses on air as we can. I’m your host Brian, along with my co-host James. We’ll be your advocates for issues at hand. Hey James!

James:   Hello, Brian. We have a fantastic show today. We’ll be speaking with Steve Potter, he is one of the founders and on the Board of Directors of PMI Long Island, which is Project Management Institute, Long Island Chapter and they’re also our sponsor.

James:   Yeah. I think he’s probably the first genuine celebrity that we’ve had on the podcast.

Brian:   He is a celebrity. Absolutely.

James:   Not quite at the Clooney level but probably somewhere just below that.

Brian:   Yeah. I would say. Absolutely. A well-respected guy. Fantastic to have him on the show. We’re going to be talking about interviews, we’re going to get interview tips from him, ideas, have to answer certain questions. I have a joke—an interview joke.

Brian:  [laughs]   A couple of weeks ago, I had a job interview.

Brian:   This is the joke. It’s starting now.

Brian:   So, a couple of weeks ago I had a job interview. I spoke with the HR Manager.

Brian:   And she asked me if I had any weaknesses.

Brian:   And she goes, really, that doesn’t sound like a weakness. Yeah, like I give a damn what you think.

Brian:   So I haven’t heard back yet, but I got my fingers crossed on that one.

Brian:   What’s the worst interview you’ve ever had?

James:   The worst interview I ever had…I can think of…a couple of things, there’s an interview story that I tell that’s funny where I was interviewing for a major bank and they brought me into this gigantic Romanesque city. It was enormous. Thousands and thousands—fifty thousand square feet of cubicles.

James:   Yeah. And they walk me in to this maze…

James:   Yeah. Right. So they walked me in through this maze of cubicles and a woman sits me down and you know, it was a long walk to get in there and I’m thinking, Oh OK, this is it. This is the bank and she sits me down and she says, “So, can you tell me why do you want to work here at Mega Bank?” And I said, “You know, I have to be honest with you. I have absolutely no interest whatsoever in working here.” And she didn’t miss a beat. She said, “Well, thank you so much for coming by. Let me show you out”.

James:   I don’t know if that’s the worst thing.

James:   I’ve been on a number of interviews but that was…

Brian:   Mine was I went to a company that was so structured it was ridiculous. One of the phrases this woman—the woman I interviewed with—that kept saying she was, “You need to be flexible in being inflexible”

Brian:   Which I was like, WOW! And she said it a few times.

Brian:   So it was such a structured environment and she goes, “You know, if you even want to  get anything done, it’s all done by committee and …it’s kind of like, “All right”, I mean I never heard anybody unsell me on a job before.

Brian:   It came to the point where she even came out and said, “Do you want to continue with this process?” It wasn’t any vibe I was thrown off because I go all in when I’m in an interview

Brian:   She goes, “I’ve asked this question before and a couple of people had said they want to take themselves out of running.

James:   Did you hang in there?

James:   Did you get the job? Is that where you’re working now?

Brian:   I need to be flexible in being creative in my flexibility.

Brian:   So, it was so interesting—I don’t think it was a tactic that she was using and it turns out I think I do believe I saw her job being listed a couple of months afterwards, so I don’t think…

Brian:   I even think that maybe she was unhappy

James:   I think, you know the interview process in some ways is very flawed. I find as a candidate that I’m so desperate to get the job. It doesn’t even matter if you want the job. Once you engaged in the process of “Oh wow, they want to interview me. I want this job” and it’s like –so I feel it’s very one way as a candidate I’m saying everything that I can to sell you on the concept of hiring me for this job. And really it should be a good interview really should be a lot more back and forth. Do you want to work here? Do we want you to work here?