This episode is sponsored by The Agile PrepCast. Earn 37 PDUs:: 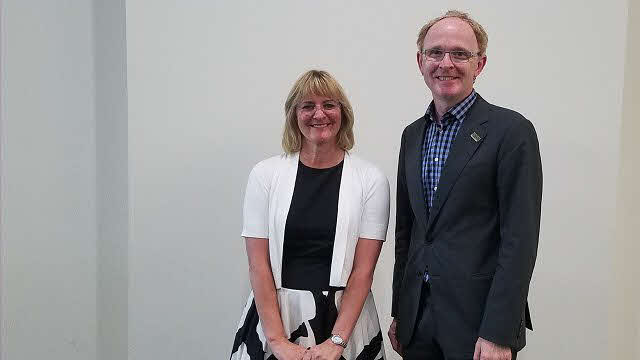 This interview with Cyndi Snyder Dionisio was recorded at the 2016 PMI® Global Congress in San Diego, California. We discuss her presentation "PMBOK® Guide -- Sixth Edition: Preview of Coming Attractions". Here is the session description:

A Guide to the Project Management Body of Knowledge (PMBOK® Guide) is being updated as we speak, and the Sixth Edition will soon be published. This session provides insights into the new edition, including a peek at a new chapter on the role of the project manager. For each Knowledge Area, there are new sections describing key concepts, emerging trends, and tailoring considerations, as well as updates to ensure the PMBOK® Guide remains relevant to most projects, most of the time. Come and find out what to expect!

Cyndi was the chair of the team that worked on updating the guide and in her presentation (as well as in this interview) she introduces us to the publication timeline as well as many of the changes that are coming our way. This was of particular interest to me professionally, because the guide is a central text that we use in our PMP certification training for our students.

If you would you like to know more about what's coming in the new version, when and how it will be released and when the PMP exam will change to the new standard, then please click to visit our PMBOK 6 article.

Cornelius:  Welcome back everybody to the Project Management Podcast at PM-podcast.com Once again we are coming to you live from the PMI 2016 Global Congress in sunny San Diego, California and with me this afternoon is Cyndi Snyder Dionisio. Hi Cindy!

Cyndi:  No, more like, Congratulations, you’ve handed it off, it’s done. Thank you [laughs]

Cornelius:  Let me ask you the obvious question. Why did you choose to take on this enormous task of bringing out the next PMBOK Guide?

Cyndi:  Anybody who studied motivation theory knows there’s different motivators, right? And so, there’s one theory that says people are motivated by accomplishment and achievement. I am motivated by accomplishment and achievement. I’ve done it before. I want to do it bigger, I want to do it better and I love working with the team I got to use. I’ve worked with an international team of people from Israel and Australia and Spain and Canada and Great Britain and it was just oh…it’s just the best ever.

Cornelius:  Okay. And when you say you have done it before, you did it for the fifth edition, as well…fourth edition?

Cornelius:   Fourth edition. So, you skipped one. Okay.

Cyndi:  Dave Violette got that one.

Cornelius:   Alright. Alright. So, the obvious question is why is there a 6th edition coming out? Was the 5th edition not good enough?

Cyndi: [Laughs] Right, it was wrong. No. Kidding. Yeah. So, there’s a standard and a standard is…

Cornelius:  An NC Standard we have to also…

Cyndi:  American National Standard too and that requires that you look at and update or review the standard every 5 years so it was time to do that. Part of it was the NC compliance. The other part is our profession is progressing and so there are new practices there showing up, like Agile. Agile is trying to show up more and more. It’s part of our continuum of practice and so we feel it’s important to update the guides so it’s more reflective of what is happening today. And then, I always tell my team, really, what are we here for? We’re here to change the world. Change happens through projects. If we can help improve the way people do projects, we can help improve the way the world works.

Cornelius:   Excellent. How many people were on your team? You mentioned there was an international team. How big was it?

Cornelius:  Alright. Let’s move on to the guide itself. There’s something that many people probably don’t realize when they hold the printed copy in their hands, they’re actually holding two things: they’re holding the standard and they’re holding the PMBOK Guide. Could you help them explain that?

Cyndi:  Yes. The standard is the NC National Standard and the 5th edition if you open it, there’s the annex and it’s called A Standard of Project Management for Managing a Project, something like that.

Cornelius:   Something along those lines.

Cornelius:   It’s the section that nobody actually reads. Almost.

Cyndi:  That’s right. It’s inputs and outputs and description and process. That’s the standard that has to be updated. Once you update the processes and the inputs and the outputs, then you got the guide, which is what everybody thinks the standard is, right? That’s what we called the ITTO – Inputs, Tools, Techniques and Outputs and the first three chapters.

Cornelius:   Okay. There were simplification going on inside of the standard in particular in the ITTO tables. It was said that it was simplified for stability. What does that mean?

Cornelius:  This subsidiary plans are all part of the project management plan, therefore you don’t need to mention them individually.

Cyndi:  That’s right. And we’re really trying to emphasize that you should tailor what’s needed. So, from my project management plan I had a volunteer engagement plan. Most projects don’t have that. They might have a safety plan in construction so I’m trying to get people to engage their critical thinking to say I don’t need a schedule management plan. If I don’t need a schedule management plan, I need a project management plan and it should have the components I need to manage this project. Let’s just make it simple. Your PM plan is an input and project documents are an input. They’re separate. And we’re going to list them. For example, a project document might be your requirement. It might be your risk register might be your stakeholder register but you should determine what you need as an input.

Cornelius:   Alright. You mentioned tailoring. And I understand tailoring within the PMBOK Guide is going to be included nearly in every one of the knowledge areas explaining how you should be tailoring that. Why did you put that in there?

Cyndi:   Sort of again, just –we can’t just say, “You should tailor this”, and then expect people to all of a sudden know how they should tailor. At the front of every knowledge area chapter, we’ll have a subsection called “tailoring” and we have some questions that people should look at to say, “Hey is your environment more adaptive or predictive? Do you have a matrix organization or do you have a projectized organization? Are the requirements for this project stable or are they still evolving?” Based on the answers to those questions, you might have different project life-cycle. You might have different inputs, you might have different tools and techniques so we’re giving people some questions to look at prior to looking at a knowledge area or series of processes to say, How can I select the best project documents or the best way to approach this for my individual project?

Cornelius:  So it’s becoming much more of a pick and choose you own kind of an approach.

Cornelius:  Yes. I think one of the big things that people want to know is when we switched from the 4th edition to the 5th edition, “Oh look! A new knowledge area, stakeholder management” Any big, big changes like that in the 6th edition?

Cyndi:   I know. My goodness. Three new processes and one went away.

Cyndi:   Totally redone. Totally redone. A lot of the same knowledge that was in three chapters is now in two but it has been revised and there’s a new chapter called The Role of the Project Manager.

Cornelius:  Wasn’t that Appendix X-1 or something like that?

Cyndi:   No, we’re talking about the role of the project manager and we actually referenced the talent triangle. We talked about skills and abilities that the Project Manager needs and we had never talked about that anywhere. And so, that’s in there and I think it’s really good information.

Cornelius:  Okay. While we talk about these three chapters here, I just attended an Agile working session and that you helped facilitate and you mentioned, Oh Agile is going to be in the PMBOK Guide starting in this first three chapters and then you will continuously see it in the rest of the book in areas as well. Tell us a little bit how Agile found its way into the PMBOK Guide.

Cyndi:   Well, that’s a good question. This 6th edition, rather than focus on traditional project management if you will, is acknowledging more the full spectrum of project management practices. Some and the other thing is we’re starting to pull apart the idea of a project life-cycle and the development approach. So, the life-cycle is a series of phases and in an IT project, it might be requirements, design, detailed design build, test, deploy. OK. In other things, I might have a concept of operations, and then process analysis and then something else. So, the phases that make up the project life-cycle are part of each project, they’re different for each project. But the product service or result that you’re developing, that’s a whole separate thing. That’s kind of in the “Ok, we’ve done our organizing, we’ve done our originating, we have a turn at closing but now we got to do the do. We got to build this thing. How are we going to do it? Incrementally? Are we going to build a little piece and get feedback then build a little bit more and get feedback? Are we going to plan it all out until we have all the requirements done to the nth degree and then implement them? Are we going to build a little bit and deploy it, build a little bit more and deploy it? That’s the development approach and that’s where we start to talk about Agile. Agile can be a development approach so we talked about that in the first three chapters. I think it’s chapter 1 and then in the start of every knowledge area from Chapter 4 to Chapter 13, we have started to codify four main things that we’ve talked about before we hit the first process and that is Key Concepts, Considerations for Adaptive Development and then what else is there? Approaches for Adaptive Environment,  key concepts, trends and emerging practices approaches, ok, got it.

Cornelius:  There you go.

Cyndi:   Yes, those four new sections in the front of each knowledge area includes Key Concepts, and those were really in the 5th edition and they were scattered throughout so we just codified them under one section header called Key Concepts. We’re also looking at trends and emerging practices. So, there are things that people think should be in the ITTOs but they aren’t practiced on most projects most of the time but they’re gaining grounds. So, we can talk about those. We can talk about back log scheduling or we can talk about how things revolving in risk management but they aren’t necessarily baked into most projects most of the time. And then we can also talk about tailoring considerations which I talked about what do I need to think about when I’m going to tailor my Project Management Plan? And then the other thing is approaches for adaptive environments. And that is how we talked about OK, we’ve talked about most of what we called “plan-based, predictive waterfall development”