This episode is sponsored by The Agile PrepCast. Get your PMP PDUs: 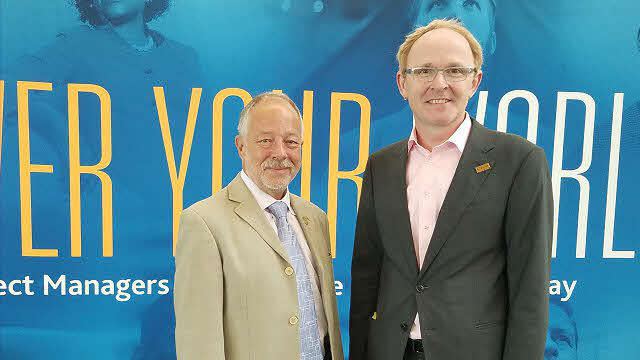 This interview with Dr. David Hillson was recorded at the 2016 PMI® Global Congress in San Diego, California. We discuss his paper and presentation My Stakeholders are my biggest risk -- help!. Here are two passages from the paper:

Stakeholders can pose a real risk to our projects—at least some of them can—and project managers and their teams need to be aware of this and take steps to control risks to their project that arise from risky stakeholders. As with all risks, stakeholders present both positive as well as negative risks, and we need robust ways of identifying which stakeholders offer opportunities, and where potential threats might lie.

A risk is any uncertainty that could affect achievement of project objectives. Some of the biggest risks in projects arise from stakeholders, and project managers and their teams need to be aware of these risks and manage them proactively. As with all risks, there are both positive and negative stakeholders, and it is important to identify which stakeholders offer opportunities, and where potential threats might lie—and then act appropriately.

David is retiring and this was his last active participation at a PMI Global Congress in North America. He plans on continuing to attending the EMEA congresses and he has offered to be available for interviews over Skype in the future.

This interview is 26 minutes long. This means that you can "legally" only claim 0.25 PDUs for listening to it. However... if you first listen to the interview and then also read the white paper on which it is based, then you can go ahead and claim 0.50 PMP PDUs!

Cornelius Fichtner:   Welcome everybody to The Project Management Podcast™ at www.pm-podcast.com. We are coming to you live from the sunny southern California town of San Diego where we are attending the 2016 PMI® Global Congress and when I say sunny, I mean sunny because we are sitting outside overlooking the beach and with me is Dr. David Hillson, the Risk Doctor.

David Hillson:   Hello Cornelius. What a lovely place for an interview.

David:  Better than some we’ve done.

Cornelius:  Absolutely. We’ve done a couple in the hallways. We’ve done one in the exhibitor hall and now we’re outside here in the sun. This is great. It’s getting better and better every year

Cornelius:   David, you are going to be talking about risk, as you are at most PMI congresses, but before we go into your risk presentation we have to mention that you are the co-chair of the upcoming PMBOK 6.

David:   That’s right. It’s been a major expedition for me. A commitment of over two and a half years. We started in August 2014. I’m the vice-chair to the wonderful Cyndi Dionisio, who I know you’ve also interviewed.

David:   And the good news is that we submitted the final manuscript to PMI Publications on the 15th of September just about ten days ago, two days earlier than our original schedule that we made in August 2014, despite a one month delay when there was a problem with the exposure draft software at a six-week delay when PMI decided they wanted to change the focus on Agile. So, we had two major delays and we still delivered two days early.

Cornelius:   You mentioned before we started the interview that there was a shift in risk and stakeholders which sort of led to your presentation.

Cornelius:  Right. It’s titled “My Stakeholders are my Biggest Risk, Help!” The opening statement in the abstract is: “Stakeholders can pose a real risk to our project.” Can you expand on that a little bit?

David:   Yes. I think we all recognize that we have a very broad stakeholder network involved in the projects and there’s an informal definition of a stakeholder as somebody who can really ruin your day. That’s the kind of people and organizations and groups who have an influence, who have power to different degrees, who are concerned about the project in one way or another. And we all know we have to take care of those people. But the idea that they pose a risk I think gives us some insights into how we can understand their influence and actually manage them using a risk-based approach. So, we’ll get into this perhaps in a little more detail soon, but I see risk as “uncertainty that matters”—that’s my starting definition of risk as you know. The behavior of stakeholders is very often uncertain and it absolutely matters.

David:   That means because they are uncertainties that matter, then they’re risks.

Cornelius:   Absolutely. This may be a completely inappropriate question, but is there a group of stakeholders in your experience that poses the biggest risks to our project? Can we define them?

David:   Yes, it’s the sleeping stakeholders, the ones with the hidden agendas who quietly, under the surface, exert an influence that we don’t see in an overt way. So, we all know about customers and we all know about the project sponsors and their supplies and their project team and they are very visible stakeholders, but then you got the quiet ones. You’ve got your finance department, your procurement department, all the competition and all the regulators who are there in the background, and often their influence is quite significant but it’s under the radar, and then they’re the ones who pose the biggest risk because we’re not managing them proactively.

Cornelius:   You begin the paper with the title “People Power in Projects”. Can you develop that for us? What do you mean by “people power”?

David:   Well, I want to get to the point of understanding why stakeholders are risky and they’re risky because they have power. But power is a very interesting subject. There’s been some really good research on this which goes way back to the 60’s or actually late 1950’s. Talking about five sources of power and each of these we have to recognize are different, and different stakeholders come to us with these different sources. One of them is sanction power. If somebody has the ability to hurt, you or to withhold something that you value then that gives them power over you because if you don’t do what they want then something unpleasant might happen. The converse of that, the opposite is we have reward power. They can give you something that you value, that you want, if you accept their influence. We have positional power which is to do with people who have—kind of a legal authority or authority because of their role as the “boss” or the project sponsor.

The other two are quite interesting. Reward and sanction, positional - but then we have those people who are technical experts in a particular area and because of their expertise, they can demand influence. They exert power because they know more than you do and so you’re dependent on them. The last is called referent power. It’s a sort of the hero-worship power, role-modelling—somebody who you admire, who you look up to, who you think is a really nice guy and I really appreciate his approach and I would like to be influenced by him. And in some ways, that’s the strongest source of power of all. Different stakeholders in the network can exert any of those five sources of power and actually any of us can. One of the things we come back to in the end of the paper is to say when we want to influence stakeholders who are a risk to a project, we too, can exert some of those five sources of power. They’re most helpful when we exert them in combination. So, if you’re a technical expert who is a really nice guy, you have both expert power and referent power. And if you also have the ability to tell someone what to do because you’re the boss, then you have three sources of power and it becomes much more useful to you. We need to understand those power sources both from the stakeholders’ side, but also as tools that we can use as project leaders.

Cornelius:   Following the discussion about power, we move into identifying stakeholders and categorizing them, and in the paper you introduce us to a three-dimensional model of categorizing our stakeholders, versus the two-dimensional model that we usually see in the PMBOK® Guide. How did you develop that model and why did you develop that model?

Cornelius Fichtner
Cornelius Fichtner, PMP, CSM, is the host and the author at The Project Management Podcast. He has welcomed hundreds of guests and project management experts to the podcast and has helped over 60,0000 students prepare for their PMP Exam. He has authored dozens of articles on projectmanagement.com and PM World 360. He speaks at conferences around the world about project management, agile methodology, PMOs, and Project Business. Follow him on Twitter and connect with him on LinkedIn.