Get PMI Agile Cerfified Practitioner (PMI-ACP)® Training on your phone: 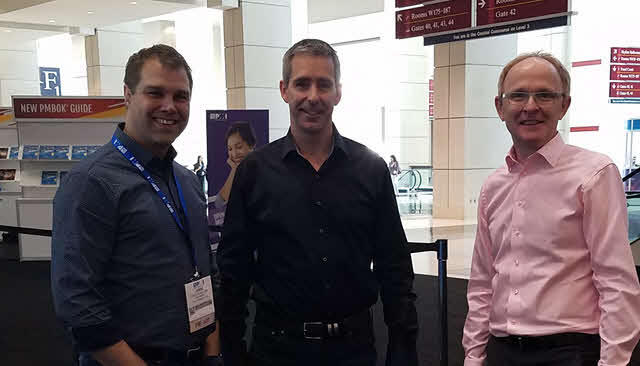 Work is changing from industrial, routine work to knowledge-oriented work that requires more of an ongoing collaborative endeavor to manage change, complexity, and uncertainty. Learn how project management has evolved to reflect these changes with the publication of the new “Agile Practice Guide,” developed in collaboration with the Agile Alliance.

We not only discuss the implications that The Agile Practice guide has on the PMI-ACP exam and your PMI-ACP exam prep, we also examine the core chapters of the new guide and discuss application and adaptation implications. We explore many elements of the guide and learn more about its content and use in a variety of domains.

Cornelius Fichtner: In this episode of The Project Management Podcast™, we talk about the Agile Practice Guide that was released earlier this year.

Hello and welcome to The Project Management Podcast™ at www.pm-podcast.com. I am Cornelius Fichtner.

We are coming to you live from the splendid 2017 PMI Global Conference in Chicago.

Cornelius Fichtner: And sitting with me here at the PMI Bookstore are Jesse Fewell and Mike Griffiths. Hello Mike!

Cornelius Fichtner: And listeners of the Podcast, you already noticed this sounds a bit different than normal interviews do. Yes, we are using the handheld mic today because there are three of us. And since I started out with mic, let’s continue with Mike.

Mike Griffiths: Sure! So the Agile Alliance is a not-for-profit group that exists to promote and educate people about Agile methods. So Agile is a broad umbrella of methods. People are very familiar with Scrum but it includes other approaches such as XP and Feature-Driven Development and another type there.

The Agile Alliance is like I say is not-for-profit group that creates their own conferences and promotes Agile and Agile practices in organizations. So there are resource center. You can go there to learn more about Agile and techniques.

Cornelius Fichtner: What was the vision for developing the Agile Practice Guide?

Mike Griffiths: So it was really to provide guidance for project practitioners that are frequently in the space of having Agile teams or being asked to spin up Agile teams quite often in less than Agile environments. So we described the hybrid environment being where we have some Agile elements in play but parts of the organization are still traditionally predictive or plan-driver.\

And so the Agile Practice Guide was really the basic steps for project practitioners who are in that space, who would like to become more Agile and perhaps not sure how to do that or what steps to follow. And we wanted to provide a methodology agnostic independent way of providing that guidance.

Cornelius Fichtner: And Jesse, even though it’s methodology agnostic, what methodology or framework did you actually follow as you prepared and developed the guide? What is more a plan-driven or was it more an Agile approach?

Jesse Fewell: Well Mike would say was a hybrid approach. We had a very firm fixed deadline for the perspective publication. I mean this is a publication project and so there is a fixed deadline that had to synchronize with the publication of PMBOK® Guide Sixth Edition. Because we needed to align with that from a content perspective and from a product delivery perspective. But within those firm fixed kind of constraints before which a lot of things happen and after which a lot of things happened, we were very organic and very fluid and very iterative in the creation of the draft, the manuscript itself.

So we started first maybe with weekly iterations and that kind of evolved later down the road to more ad hoc iterations once we were getting crunched, crunch time. So we didn’t actually follow any formal methodology per se as much as we were trying to be as flexible and adaptive and iterative within fixed schedule.

Cornelius Fichtner: Who is the intended audience of the guide?

Jesse Fewell: It’s really for project managers who are starting on their Agile journey. There’s just so much this conversation that one of the explicit things that Mike is mentioning is we had to choose an audience. We had to choose a firm what is in-scope and what is out of scope definition.

And so, we really wanted to center it towards project managers who are kind of beginning in their guide. So for those of you who are listening that are little bit more experienced with Agile method, you will find the guide to be filled with very familiar content. So that’s what we targeted.

Cornelius Fichtner: Let’s talk about your roles on the guide as you were developing it. Mike, what was your role?

Mike Griffiths: So I was representing the PMI. I was the Chairperson for the Core Writing Team. As Jesse said it was very organic so I don’t really think my role was very different from everybody else in that I was part of the team that did the pair writing and the pair reviewing of chapters. I had a little bit more coordination I guess to do so I help with the kickoff like prepared some slides or ironed what we hope to achieve, what some of our inputs and some of our constraints are likely to be. It was really down to me when we were missing deadlines or up against a gun in terms of having to deliver.

Our sponsors of PMI and Agile Alliance would approach me and say: “Hey Mike, where are you at? When do you guys are going to be done? We need to see a new draft.” Or whatever. So my role was fairly light from the coordination perspective because I basically just pushed everything to the team and said: “Hey, here’s where we are at. They are looking for a new draft. What can we cut by the date?”

Cornelius Fichtner: And Jesse, where were you involved?

Jesse Fewell: I was one of the other I think there were a total of 7 core team members and my experience was very similar to Mike’s. Mike’s had a lot of that public facing responsibilities. Some of the more administrative things but all of us work in pairs and each pair was responsible for a chapter and then after we finish the chapter, we would rotate where there would be another pair that would review it and then offer feedback and then we would synthesize those different parts of it.

We also had a couple of face-to-face meetings in person and that’s where everybody had a responsibility to contribute as a group. And then it was fortunate that at our last face-to-face, we had the full team together where we could actually finalize everyone’s opinion. So each person had to write a certain chapter but it was done as a pair. And so each pair will self-organize. Well who would get one part and who would get another part and then another pair would review it afterwards. So that’s what kind of like a day in the life of Agile Practice Guide team member would look like.

Cornelius Fichtner: How long did it take from start to finish in the project when you first got on board to okay it is now September 6 and it’s out?

Mike Griffiths: So we started I think in August of 2016 with our kickoff meeting. We basically only had from then until the end of the year to do our writing. So we had from August through December to get the first draft written and then it went out for pair review. So we had 30 Agile practitioners and 30 PMI sort of more traditional project managers review it and provide feedback.

We expected to get about 1000 comments on it. That’s typical for guide of this length. We get over 3000 comments back so we really scramble to try and sort our way through all of those comments. So the writing period was compressed into a few months. We then had this period of review because that takes awhile and then figuring out what to do with the comments. Because this is a PMI standard, each comment has to be reviewed by at least two people and then we got to either accept it, defer it, or reject it or accept with modification. So we had this to do for over 3000 of these items that came back.

Cornelius Fichtner: Personal interest last year at the conference in San Diego I believe we were, you had a workshop where people could come in and also provide input. How was that input used in order to develop the guide?